Manufacturing makes its mark in the Central SC Region 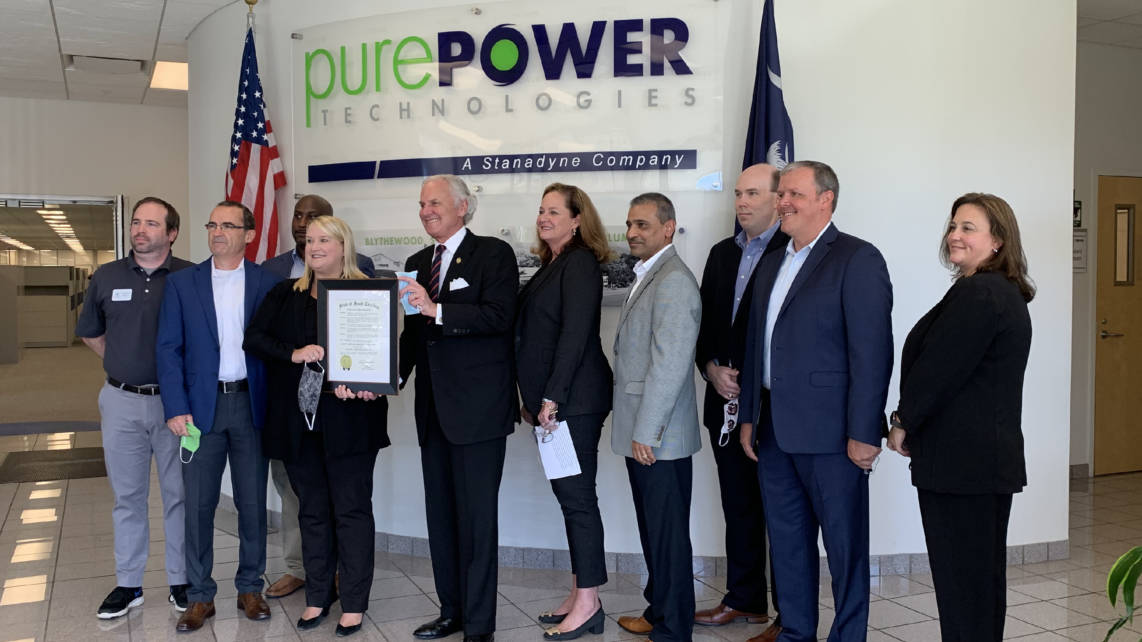 The manufacturing industry is a historical stronghold of the South Carolina and Central SC Region economies with its origin deeply rooted in textiles. From those beginnings, the industry has evolved dramatically, capitalizing on new technologies and offering a wide array of world-class products and services. Today, there are more than 400 manufacturing facilities within the Central SC Region producing advanced products like pharmaceuticals, appliances, chemicals, consumer goods, and high-performance nonwovens.

With nearly 70,000 skilled manufacturing workers, our communities are filled with the experienced talent employers need, while future generations are supported by a network of educational institutions and training resources acutely focused on preparing them for future manufacturing work opportunities.

In celebration of South Carolina Manufacturing Week #SCMFGweek20, we are profiling some of the innovative facilities found in the Central SC Region and showcasing just how much is #MadeinCentralSC:

#SCMFGweek20 feature: DAK Americas’ Calhoun County facility is just one of five manufacturing facilities in the US and one of two in SC. Established more than five decades ago, the location manufactures PTA and PET Resins and employs more than 400 skilled workers. DAK is recognized among the largest integrated producers of PET Resins in the world!

#SCMFGweek20 feature: Outfitting the newest high rise with a facade that is not only functional but attractive is all in the details. Alucoil North America in Clarendon County is elevating appearances. The sole factory location in the US – and one of three found globally – produces versatile aluminum composite panels for an array of creative and colorful building and construction projects around the world.

Fun fact: if you’re walking around downtown Columbia, SC, you can spot Alucoil’s product on the University of South Carolina’s Moore School of Business.

#SCMFGweek20 feature: Part of a regional industry that's growing 400 times faster than the national average, The Ritedose Corp got its start in Columbia 25 years ago. Specializing in the production of inhalation products, eye and ear drops, and oral liquids, TRC can produce 1.7 billion units every year. Helping make that possible are the more than 300 employees combined in the city location and a location in Richland County.

#SCMFGweek20 feature: Helping you rest easy is all in a day’s work for Healthcare SC in Fairfield County. Also known under the brand MLily Mattress, the company started manufacturing its memory-foam mattresses locally in 2019 at its state-of-the-art plant. And since there's no rest for the weary, the approximately 200 workers at Healthcare SC are keeping the facility on track to becoming the second largest mattress manufacturing plant in the nation!

#SCMFGweek20 feature: While you're buying in bulk, Suominen Nonwovens in Kershaw County is producing in bulk. The facility manufactures nonwoven material used for wipes, hygiene and medical products. This location is one of three North American production plants and one of eight in the world. With more than 140 employees, it also employs roughly 50% of the company's US workforce and 20% worldwide!

#SCMFGweek20 feature: An iconic name that's hard to miss rolling down the street. Michelin North America is a long-time employer in Lexington County. The company got its start back in the early '80s producing passenger vehicle tires, and has since expanded its operations, production lines and the scale of its products with its massive Earthmover tires. With more than 2,000 employees in Lexington County, and 9,000+ statewide, Michelin NA has been named one of the Top 5 best employers in South Carolina by Forbes.

#SCMFGweek20 feature: There's a good chance one of your handy household appliances is made by Samsung. According to the company, more than 71% of US households own at least one of their products. And if that appliance is a washing machine, it may have been made at the Samsung South Carolina facility in Newberry County!

Samsung opened its local operation just a few years ago and has since become one of the leading companies in the county and the Central SC Region based on employee headcount. Of the 800 workers at the facility, roughly 90% of its workers come from Newberry and surrounding areas!

#SCMFGweek20 feature: What's the next best thing since sliced 🍞? Being the company producing that bread!

Bimbo Bakeries USA in Orangeburg County has been filling baskets with baked goods since the 1990s. Part of the world's largest baking company, BBU has locations throughout the US and is the only commercial bakery manufacturer serving every state in the nation. Along with its own labeled brand, BBU produces products under the brand names of Thomas, Sara Lee, Arnold, and Entemann’s to name a few. The company operates more than 60 bakeries and employs more than 20,000 people nationally.

#SCMFGweek20 feature: A relatively newer manufacturer in Richland County, ZVerse, Inc. has become well known for the Zshield. The shield, part of the company’s participation in the response to combat COVID-19, has brought it national attention. Most recently, ZVerse face shields have shown up on the sets of television series like The West Wing and black-ish, and the company has even joined forces with the University of South Carolina to outfit football helmets with protective shields.

While face shields are a strong focus for the company during the pandemic, its team is also creating 3D-printed solutions for digital manufacturers and OEMs.

Want to learn more about manufacturing in the Central SC Region?